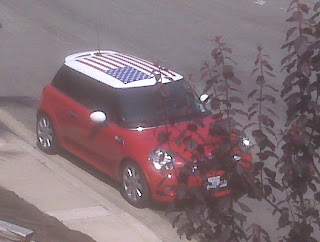 Flag Code Violations:  “The flag should not be draped over the hood, top, sides, or back of a vehicle or of a railroad train or a boat.  When the flag is displayed on a motorcar, the staff shall be fixed firmly to the chassis or clamped to the right fender.  “Section 7(b).  “No disrespect should be shown to the flag of the United States of America….”  Section 8.  “The flag should never be carried flat or horizontally, but always aloft and free.”  Section 8(c).  Photo by Ross G. Simmons.
Posted by Ross and Hunter at 4:17 PM No comments:

We have separately concluded that flag designs are inappropriate for printing, embroidering or otherwise displaying on clothing.  (See No Flags on Clothing, Please.)  An exception referenced there and discussed here is selective use of a patch bearing the likeness of the flag of the .  Section 8(j) of the Flag Code provides that “a flag patch may be affixed to the uniform of military personnel, firemen, policemen, and members of patriotic organizations.”

Anecdotally, most know flag patches to be so used.  By extension and without express authority, however, usage of a flag patch on uniforms is typically extended to analogous, uniformed personnel as well, perhaps by custom, such as uniformed governmental personnel and private security guards.  We are not strongly opposed to that.  One could argue that any uniformed individual charged with service to or safety of citizens is inherently a “patriotic organization.”

Placement on uniforms is not dictated by the Flag Code, but in civil use the flag patch is most often found on the right sleeve.  We surmise that this is derived from the ordinary display provisions of the Code, that typically require placement of the flag to the “the speaker’s right” (Section 7(k)), or elsewhere, that “no other flag or pennant should be placed above or, if on the same level, to the right of the flag of the ….”  Section 7(c).

Military placement is by regulation of the Armed Forces, and varies between the left and right sleeve among military branches and uniforms.  Conventional military usage, however, dictates that “the star field faces forward,” which “gives the effect of the flag flying into the breeze as the wearer moves forward.”  Army Regulation 670-1.  When this rule is applied to the right sleeve, its use is called the “reverse field flag,” since it is opposite of what one versed in flag etiquette would expect.  (For instance, when a flag is displayed on a wall, “the union should be uppermost and to the flag’s own right, that is, to the observer’s left.  Flag Code Section 7(i).)

Regardless, the prerequisite to application of a flag patch, however, is a “uniform,” as Section 8(j) limits its exception to specified or specifically-described organizational uniforms, rather than mere, casual ornamentation.  Thus, private, individual use of a flag patch on clothing is, in our view, improper, just as we have separately concluded that use of the flag or flag designs in clothing, generally, is improper.

Question:  Recently on the highway, I passed a “motorcycle gang,” each member of which had a flag patch sewn on the shoulder of their leather jackets.  Surely this can’t be OK?

Answer:  Section 8(j) of the Flag Code has breadth, and we believe it would be proper if, according to the internal rules of this organization, it could rightfully, objectively be thought of as “patriotic,” and carried out its activities with appropriate respect and reverence for the , generally, and the flag, specifically.  For example, the uniform of the Boy Scouts of America (“BSA”), too, bears the patch of the flag on its right sleeve.  In that the oath required of BSA participants calls for a duty “to God and my country,” it is the prototypical “patriotic organization” and such usage is permitted by Section 8(j).  However, once the “patriotic organization” prerequisite is found, the terms of the Flag Code do not discriminate against any one of them, or between them on the basis of other organizational ideologies; in the United States of America, our view is that is as it should be.
Posted by Ross and Hunter at 3:01 PM No comments: 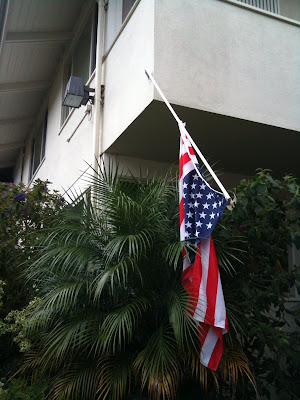 Flag Code Violations:  "When the flag of the United States is displayed from a staff projecting horizontally or at an angle from the window sill, balcony, or front of a building, the union of the flag should be placed at the peak of the staff...."  Section 7(h).  "No disrespect should be shown to the flag of the United States of America; the flag should not be dipped to any person or thing."  Section 8.  "The flag should never be displayed with the union down, except as a signal of dire distress in instances of extreme danger to life or property.  Section 8(a).  "The flag should never touch anything beneath it, such as the ground, floor, water, or merchandise."  Section 8(b).  Photo by Hunter Simmons.
Posted by Ross and Hunter at 2:43 PM No comments: