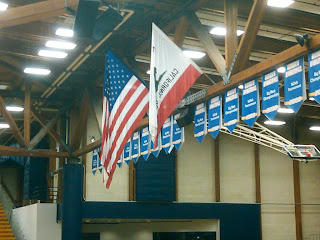 The tie between sports and patriotism is customary and appropriate, and the pageantry of athletic competition is integral to its experience, cherished both by athletes and audience.  There is an obvious analogy between good sportsmanship and good citizenship, and we applaud their celebration.  National anthems are played and national flags are displayed, both gestures, when done properly, being important reminders of patriotic themes for all participants.  We encourage such reflection at every opportunity, and athletic competition provides an obvious one.

Still, athletic competition is uniquely about the athletes; the talents they possess, the sportsmanship they demonstrate, and the many hours and personal sacrifices dedicated to their development.  As a result, national interests are, and always have been appropriately made subordinate to personal and team accomplishments.  In ancient Greece, a truce existed between all participating city-states three months before and after ancient Olympic games suspending jingoistic matters, in part to celebrate its participants and facilitate their safety.  Similarly, both our collegiate and professional sports’ ranks are blessed with foreign nationals, representing the most talented and dedicated men and women in their athletic disciplines.  In our view, we must take care, while celebrating their accomplishments, to remain sensitive to their right to remain dedicated to their own, home countries, rather than insist that they pay homage to ours.

We have separately concluded that flag designs are inappropriate for printing, embroidering or otherwise displaying on clothing as a general matter.  (See No Flags on Clothing, Please.)  We have also broadly construed Section 8(j) of the Flag Code which provides that “a flag patch may be affixed to the uniform of military personnel, firemen, policemen, and members of patriotic organizations.”  (See Flag Patches on Uniforms (Non-Athletic).)  At issue here, however, Section 8(j) begins in the negative:  “No part of the flag should ever be used as a costume or athletic uniform.”

Having begun by waning philosophically, we view this rule as appropriately and categorically prohibiting use of the image of the flag on athletic uniforms.

To be clear, in our research toward that conclusion, we have considered the position that insists on a “strict construction” of this prohibition, to the effect that it should be read merely to preclude a literal “flag” itself comprising part of the uniform.  This view holds that reference to “part of the flag” would only prohibit, say, lowering an actual flag and sewing all or some of its parts into the uniform.  We believe this interpretation incorrect.

First, such an interpretation would presuppose that the term “flag,” as used in the Flag Code, is similarly narrow and only to be applied literally, to actual “flags,” and all other representations of the flag of the United State Flag are excluded from its coverage, as a result.  This is not accurate.  For instance, in its prohibition of the use of flags for advertising purposes, Section 3 defines its use of the term to include “any flag, standard, colors, ensign, or any picture or representation of either, or of any part or parts of either, made of any substance or represented on any substance, or any size evidently purporting to be either of said flag, standard, colors, or ensign of the United States of America or a picture or a representation of either…by which the average person seeing the same without deliberation may believe the same to represent the flag, colors, standard, or ensign of the United States of America.”  The Flag Code’s context clearly applies to flags regardless of their composition (See Section 6(c), speaking of “all weather” materials.)  To the same effect, “[t]he flag should never be used as wearing apparel, bedding, or drapery.”  Section 8(d).  “It should not be embroidered on such articles as cushions or handkerchiefs and the like, printed or otherwise impressed on paper napkins or boxes or anything that is designed for temporary use and discard.”  Section 8(i).  As to this latter authority, if a flag of the United States of America is capable of being “printed or otherwise impressed,” it seems clear that the term “flag” as used in the Flag Code speaks to its likeness and representation, as well as to literal flags themselves.

Second, after its preclusion of athletic-uniform use, Section 8(j) then permits limited use of a “flag patch” (by military personnel, firemen, policemen, and members of patriotic organizations), suggesting that it interprets its own preclusion of “part of the flag” in athletic uniforms to otherwise include the use of the flag patch, for athletic uniforms are not of part of those latter, permitted uses.  Very few, if any athletic teams could be or should be “patriotic organizations.”  None that we are aware of require an oath to our country as a prerequisite to participation (naturalized United States citizens take an oath to our country, but citizens by birth do not), nor should they, as many sports permit us to enjoy the skills and celebrate the achievements of foreign athletes, and to us it would seem invariably inappropriate to compel their allegiance to the United States solely in order to enjoy the benefits, to them and to us, of their participation in athletic pursuits within our borders.

Finally, we anticipate that our conclusion might be challenged anecdotally, in that the image of the flag has been occasionally found on athletic uniforms (for instance, occasional Major League Baseball uniforms, the United States Olympic Team, among others).  We empathize with those gestures, but empathy does not make that display and use proper when, as we have concluded, it is not.  We have no quarrel with this statute, premised upon our considered thoughts, and whether it is a rule deserving of reconsideration or clarity is a question for our elected, legislative representatives.  To be sure, if the Flag Code is to be overridden by at the initiative of private interests (no matter how patriotic their motives may be), then it undermines the very purpose of its existence, and too, the respect for the very emblem it exists to assure.

Question:  This year, I’ve noticed that the helmets worn by players in the National Football League (NFL) bear a sticker likeness of the United States Flag.  Is this display proper?

Answer:  No, it is not.  We have interpreted Section 8(j) as prohibiting display or use of the United States flag, or even its image, on athletic uniforms.  Moreover, apart from our interpretation of Section 8(j), we have other concerns.  Certainly, in that the helmet of a football uniform is, by its nature, intended for protecting a player from the sport’s invariable contact with other participants as well as the ground itself, it is clear that a flag’s image in that location cannot be afforded the respect the Flag Code requires at Section 8 (i.e., “the flag should not be dipped to any person or thing,” at Section 8; “the flag should never touch anything beneath it; such as the ground,” at Section 8(b)).  More difficult, we believe that its presence on the helmets of participants who are not citizens of this country puts them in an untenable position relative to the dedication they have to their own homeland, and hence, cheapens the display of that emblem by those who truly do so by virtue of their United States citizenship.
Posted by Ross and Hunter at 3:16 PM No comments: