Presidential Proclamation -- Honoring The Victims Of The Attack In San Bernardino, California

As a mark of respect for the victims of gun violence perpetrated on December 2, 2015, in San Bernardino, California, by the authority vested in me as President of the United States by the Constitution and the laws of the United States of America, I hereby order that the flag of the United States shall be flown at half-staff at the White House and upon all public buildings and grounds, at all military posts and naval stations, and on all naval vessels of the Federal Government in the District of Columbia and throughout the United States and its Territories and possessions through December 7, 2015. I also direct that the flag shall be flown at half-staff for the same length of time at all United States embassies, legations, consular offices, and other facilities abroad, including all military facilities and naval vessels and stations.

IN WITNESS WHEREOF, I have hereunto set my hand this third day of December, in the year of our Lord two thousand fifteen, and of the Independence of the United States of America the two hundred and fortieth.


BARACK OBAMA
Posted by Ross and Hunter at 12:46 PM No comments: 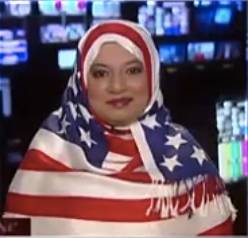 "No disrespect should be shown to the flag of the United States of America...." Section 8. "The flag should never be used as wearing apparel, bedding, or drapery. It should never be festooned, drawn back, nor up, in folds, but always allowed to fall free." Section 8(d). "No part of the flag should ever be used as a costume or athletic uniform." Section 8(j). (Image captured 11/27/2015 from http://www.huffingtonpost.com/entry/saba-ahmed-fox-news-hijab_564ca031e4b06037734bdfe2?ncid=fcbklnkushpmg00000063.)

Posted by Ross and Hunter at 5:02 PM No comments:

Presidential Proclamation: Honoring the Victims of the Tragedy in Roseburg, Oregon

IN WITNESS WHEREOF, I have hereunto set my hand this second day of October, in the year of our Lord two thousand fifteen, and of the Independence of the United States of America the two hundred and fortieth.

BARACK OBAMA
Posted by Ross and Hunter at 4:57 PM No comments:

Flag Against A Wall 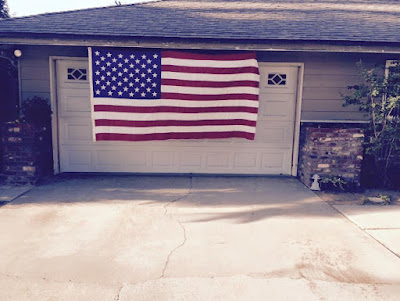 "When displayed either horizontally or vertically against a wall, the union should be uppermost and to the flag's own right, that is, to the observer's left." Sec. 7(i). Photo (C) 2015 by W. Simmons
Posted by Ross and Hunter at 4:54 PM No comments: 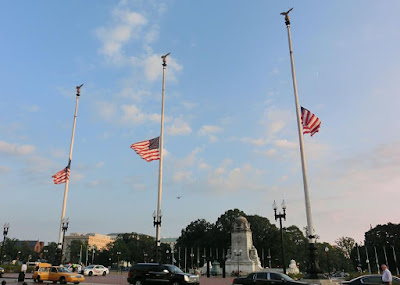 On December 18, 2001, President Bush signed Public Law No: 107-89, designating September 11th as Patriot Day. Flag Code Sec. 6(d) designates Patriot Day as one where the US flag is to be flown at half-staff from sunrise to sundown, not just until noon as is done on Memorial Day. In addition the people of the United States are asked to observe a moment of silence on Patriot Day in remembrance of the victims of the September 11 terrorist attacks.
Posted by Ross and Hunter at 4:52 PM No comments: